Tales of paramedicine, adventure and life

Paramedics are faced with challenging work, but it also comes with some humorous and “downright weird” situations which Steve ‘Sunny’ Whitfield has captured in his book.

Titled Here Hold My Drink and Watch This: Tales from the lighter side of paramedicine, adventure and life, Mr Whitfield hopes readers “gain an honest, first-hand account of what paramedics experience daily”.

“Through my career there has not been one single day that has been the same and not one case the same as the other. Every day has been unique, and I wrote to bring the reader along for the ride in the passenger seat.”

Mr Whitfield said it was his wife who suggested he share his stories.

“In the army I would keep journals when I was deployed to war zones and those journals would help me process and understand things. I also started writing the paramedic experiences for the same reasons,” he said.

“I guess it was almost a coping strategy initially but my wife loved gaining an insight into my work and so I continued writing. She was the first to suggest I should publish it.”

Importantly, Mr Whitfield said he wanted to show all sides of a paramedical career.

“There is often a lot of stress and turmoil associated with our line of work. People don’t generally call a paramedic because everything is going well. So, for me it was vitally important to pull stories together from both the dark and lighter side to reflect on the entire experience.”

Some of his favourite stories include a 100-year-old gentleman digging a trench when they arrived, and a goat attack.

“We had only taken three or four steps into a property when we heard a sound similar to a hyena murdering a cheetah echo through the paddock. It was then that we caught a glimpse of the raging goat,” he recalled.

“My left leg went right; my right leg went left and somehow my partner James and I collided in an explosion of kit before we gained our legs and hurdled ourselves back over the fence to safety. The goat slammed into the fence growling … it still remains one of my favourites.”

Mr Whitfield has been involved in paramedicine since 2011 when he joined an ambulance service, but his first clinical role was in the army as a combat first aider.

“My first exposure to out-of-hospital health care came when I was a young soldier. During my first deployment into a conflict zone in the early 2000s I was witness to a combat medic responding to an incident and it resonated with me. I started my first combat first aid course on return and things built from there.”

Most recently he wrapped up a secondment as a senior clinical educator for Queensland Ambulance and is continuing to lecture in the School of Medicine at Griffith University paramedicine program.

“I am also fortunate to accompany remote research teams on high altitude, deep water and desert expeditions as a remote crew medic with Explora Medical Media.” 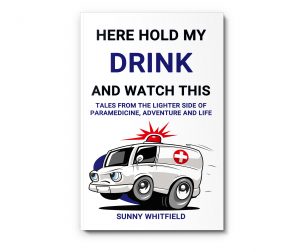 While Mr Whitfield said paramedicine “is the best job in the world” he acknowledged “it’s not easy”.

“You have got to really ask yourself why you want to be a paramedic so you can stay the course. Also don’t stop learning. I have found that upskilling in other non-clinical skills can increase your opportunity for other paramedic roles.”

Here Hold My Drink and Watch This: Tales from the lighter side of paramedicine, adventure and life is available at all major book retailers. Each paperback sold provides funds that allow a person in a remote community in Nepal access to clean and safe water for up to 12 months.